This page has been reorganized. General information for projects in development is available here.

- fixed issue with Shutoff Valve failing to stop flow of water for some items
- fixed issue with 'BACK' button not working in some menus
- fixed some info messages not showing in local chat
- fixed script issues when child prims are linked or unlinked
- fixed hydrant no longer supplying water when unlinking closed shutoff valve
- fixed run over hydrant requires shutting off valve even if shutoff valve has been unlinked
- fixed ground visible inside of ground pipe when hydrant is run over
- added decal surface for custom textures or hydrant number 1 - 9999
- added separate color setting for large cap and small caps
- currently working on final textures & materials and some more script changes
- no fixed ETA, but new beta version should be available within the next couple of days

Annual Public Services Expo (APSE) is Second Life's emergency services expo focused on Fire, EMS, Police, and City Role-Players.
This event is a great place to catch up with the latest creators in Second Life's Roleplay community along with competing against other departments in various competitions.

HD Emergency will have a booth at the event.
If everything goes according to plan then there will be an exiting new project reveal.

- fixed various bugs with shutoff valve and shutoff key interaction
- full integration of shutoff valve in hydrant script to control flow of water
- closing shutoff valve on run-over hydrant with water spraying will slowly reduce the size of the geyser
- running over hydrant will now disconnect all hose lines and drop attached items to the ground
- dropped items can be picked up and put back in the hydrant bag
- added support for Supply Line Drop feature
- added menu to toggle failure modes:

- stuck parts can be moved by attaching a cheater pipe to the hydrant tool
- the pipe will be available via the hydrant bag
- gave demonstration of shutoff valve operation, running over hydrant and failure modes

- the Fire System Box has also been updated

- added one more script change to address required compatibility with the upcoming 'Drop' feature for the Supply Lines
- update will be released this weekend
- discovered a new critical bug that needs to be fixed; update delayed to Monday

- Beta Testing of new 'Drop' feature for Supply Lines and Attack Lines is ongoing
- Attack Line has out of memory issue
- will be fixed with either adding one additional script or changing how the Couplers work
- Supply Line has compatibility issue with existing HDFS2 connection ports
- will require small update for NextGen Series, Titanium ARFF Series, One Series and Legacy Pumper
- will also require small update for Draft Float, Drop Tank, Couplers, Gated Wye, Siamese, Hydrant, Portable Pump, Ground Monitors and Wall Outlets
- this small update will also make the Hydrant Bag available on the HD Fleet
- if you know about any bugs or issues with any of the listed products please report them here so that they can also be addressed

- still working on next beta version

- still working on next beta version

- one new bug showed up, release of update has been delayed to give more time for testing of required bugfixes
- fixed Rudder randomly resets to neutral position for a split second if a 2nd avatar is seated
- fixed Deckgun foam cell only comes with 5 gallons of concentrate
- added option to hide Beacons and/or Lightbar

- Beta Testing is in progress
- fixed Gated Wye, Siamese, Coupler and Draft Float are mixed up with each other
- fixed Wheel Chocks no longer work
- fixed Attack Lines no longer have water sound
- added new 'Drop' feature for Supply Lines and Attack Lines

- still working on next beta version
- gave demonstration of newly added features
- these new features are experimental and not 100% confirmed yet
- hydrant can be run over:

- next beta version has been delayed by 1 week
- next version will add final UV mapping, final textures, running over hydrant and failure modes

- next beta testing version will be available this upcoming week

- testing is ongoing
- next version will include:

- first beta testing version will be released this weekend

- first beta testing version will be available this upcoming week

- a bugfix update is in development to address these issues

- beta testing is complete
- adding one more feature: cardboard boxes to handle spare batteries
- cardboard boxes are stored on a simple shelf
- can take a box, carry it and then place it on the ground
- box can be opened to remove spare battery
- boxes work via Gear HUD and have access settings
- update estimated to be released on 14-Jun-2021 (was delayed until 15-Jun-2021)
- full changelog available here

- new beta version sent to all testing volunteers
- update will be released once testing is complete
- next three updates for Legacy Pumper:

- showed a preview of the opened Hydrant Bag
- still work in progress, no final textures yet 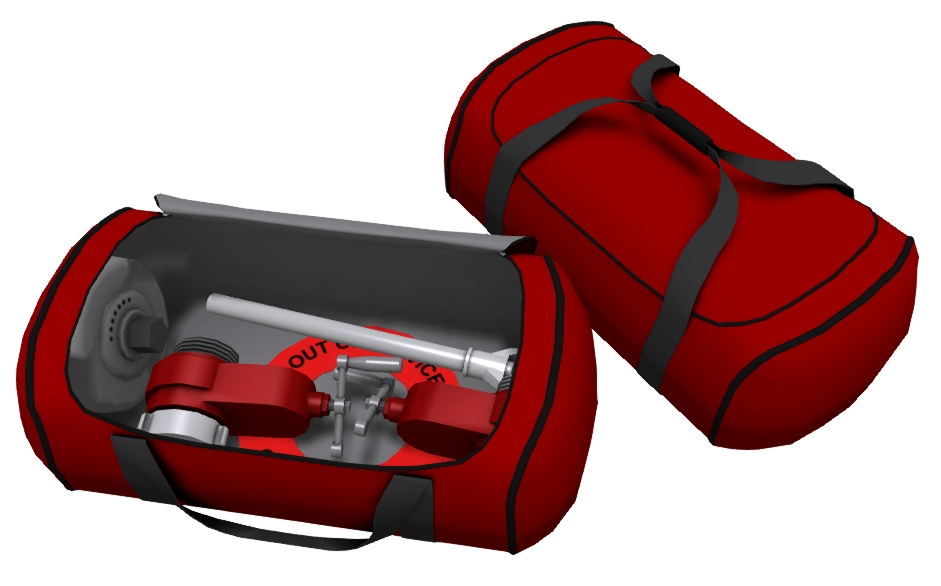 Hydrant Bag Preview Picture (taken on 14-May-2021; work in progress)

- issue with Customize HUD that fails to apply textures when new Theme is selected
- only Decals are applied, cab and box texture fails to update
- caused by old data from last synced copy of Panther Ambulance
- cause has been identified and a fix is undergoing testing

- next Marine 1 Beta still in the works; delayed due to ray-cast issues for Aerial Boom
- Emergency Light Controls fail to show up on Modular HUD for all Panther Ambulances; cause identified & fix pending

Q: Are there plans to make more add-ons for the SZYM Paladin Pickup Truck? And if so which ones?
A: Yes. Current open projects have priority before starting work on more addons for the Paladin.
More details will be available once more of the current projects are finished.
If you have ideas for add-ons you can submit them here

Q: Are there plans for a Legacy Series Heavy Rescue?
A: No fixed plans past the Pumper, Tanker and Midmount.
Next vehicle in Legacy Series after those three will depend on submitted suggestions.
You can submit your suggestion here

- created first model for the hydrant bag to make all the tools for the Hydrant accessible
- will be able to carry the bag, place it, open it up and then grab the tools
- stores hydrant tool, out-of-order marker, sprinkler cap and two hydrant gates
- will be available on Legacy Pumper in driver side front compartment (replaces wooden cribbing blocks)

- rotator Lightbar from the One Series as standalone modify enabled version
- can be used as add-on for the SZYM Paladin or any other vehicle with modify permission
- compatible with the Global Mod Link System (GMLS) for easy installation
- supports color adjustment, clear cover option, full bright option and new particle option
- available here for L$400

- HD now has a Discord Server
- you can join here

- all new HD Mini Pumper turns out to be a 1:10 scale model of the Legacy Pumper
- available to everyone who owns a copy of the Legacy Pumper (request redelivery if you did not receive a copy)
- possible future improvements: lower Land Impact, customization support, more functionality

- update has been delayed, working on new features to improve interaction with the HD Equipment
- will no longer have to click specific areas to perform actions
- all new Interaction Menu will show buttons for different action choices
- will be integrated into Gear HUD with optional Select HUD to enable position tracking for compatible Equipment
- position tracking will show the buttons always next to the selected Equipment instead of linked to the Gear HUD

- new beta version for Marine 1 Update has been sent to some of the testing volunteers
- fixed missing textures for interior cabin and door
- fixed broken color change for right beacon
- added ability to change the color of the Lightbar on the roof
- converted the notecard manual to the online format
- removed the automatic bullet rez detection (was unreliable as it gave too many false positives)
- added user controlled choice for rezzing: disabled, physical bullets or raycast
- raycast will use LSL Raycast function instead of rezzing physical bullets
- raycast shoots an invisible beam in order to extinguish HD Fires
- requires new version of the fire (will be compatible with both bullets and raycasts)